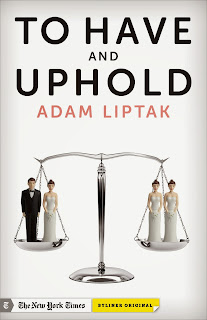 As Adam Liptak, Supreme Court correspondent for The New York Times since 2008, has done the fine favor of distilling marriage equality into fewer than 50 electronic “pages,” I feel I should reciprocate with a short review.

To Have and Uphold is a clear and engaging—at times even dramatic—recounting of marriage equality’s recent past.

Mr Liptak takes us on a tour. We start in the Supreme Court of the United States. Justice Anthony M. Kennedy delivers his Opinion for a 5-to-4 majority in US v. Windsor, the case striking down the federal Defense of Marriage Act (DOMA), defining marriage as between a man and a woman. He endures Justice Antonin Scalia’s acid dissent from the bench.

We get some history, too. We see the early boldness of California’s Supreme Court on race and marriage equality. We cruise through increasing state activity, including both California’s Proposition 8, recognizing marriage as between a man and a woman, and the multiplication of states legalizing same-sex marriage.

Alongside this twistified narrative, there is the clarity of Edie Windsor's love, marriage and, at the death of her wife, Thea Spyer, astronomical and inspiring federal estate tax bill Ms Windsor received thanks to DOMA.

In all of this, Mr Liptak’s clear-eyed brevity shines as he translates his expertise, experience, and unique access into clean, accessible and helpful writing. We learn the stars in the firmament: basic law and the top line of important legal arguments; and the essential progress of political debate in what may be the frontier of civil rights. Mr Liptak shows readers the guideposts in a seemingly fast-moving, complex and controversial issue. The chapter, “The Pace of Change,” is particularly good in summarizing the march of issues, cases, arguments, decisions and people.

Two issues occur to me—neither of which impair the book.

First, while I appreciate the value—$1.99 to be exact—, I do crave taking advantage of the electronic platform beyond ease of delivery, for example by offering links to relevant material and media. This would be perhaps particularly valuable for relevant legal material.

Second, some critics have noted the book lacks substantive legal analysis. True enough, I suppose. There is Mr Liptak’s rare editorializing—for example, casting himself into the mind of Justice Kennedy listening to Justice Scalia; or characterizing Justice Kennedy’s decision as lacking legal clarity.

So often repeated, it seems accepted Justice Kennedy’s decision lacks firm ground. It would be helpful to know more.

But, surely one has to balance these gripes against the value of a wisely imposed brevity. Mr Liptak’s remarks are few and do not hinder the story he tells. The insertions strike me more as wanderlust—a glimmer of the author, from behind the curtain of a wisely imposed brevity, peeking at what more pages might bring. It occurs to me the griping, such as it is, may be an approving wish for more.

As for passing speculation about the mind of Justice Kennedy, or any other Supreme Court Justice, ‘Abandon hope, all ye who enter here,’ comes to mind.

In short, with To Have and Uphold Mr Liptak does what I doubt cameras in the Court will do: He provides clarifying access to what we consider as we struggle to say what the law is.
Labels: Adam Liptak Anthony M. Kennedy Antonin Scalia Defense of Marriage Act GWorks Reviews Hollingsworth v. Perry John G. Roberts Jr. Marriage Equality Prop 8 Supreme Court US v. Windsor Vaughn R. Walker